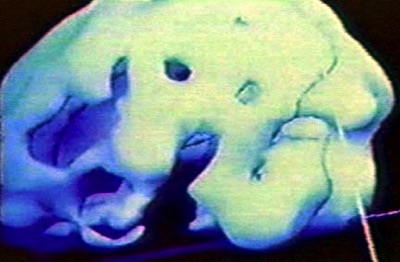 A cat scan of a 22-year-old's brain after two years of designer drug abuse shows holes that make it look like the brain of a 65 year old who has suffered from multiple strokes.

If kids are chugging water at a party, a parent's first impulse would be to be proud of their good sense, but Wayde Lee cautions, be leery.

Dehydration is one sign of methamphetamine use, according to Lee, who is a part of the Youth, Alcohol, Tobacco and Other Drugs Prevention Program at Alu Like Inc. on Molokai. And unfortunately, the people who should be able to recognize early signs of drug abuse are often unaware of them. To help raise their consciousness, Lee recently narrated a video, "Designer Drugs: What Every Parent Should Know," which airs this week and next.

"Parents should be aware so they can let kids know how to protect themselves," said Ann Marie Kirk, a television director and producer for the Hawaii State Department of Education Teleschool Branch. Although a video about drugs varies from her educational programs about art, geography and other school topics, she felt strongly about getting the word out to parents about these dangerous substances.

The mantra "Just Say No!" has been used for more than a decade to warn kids away from drugs. But Lee says that message is not enough these days as peers convey the message that designer drugs are cool, pervasive and glamorous. Yet synthetic drugs are proving to be more harmful than ever, and Lee says, "One bad choice can be a deadly choice."

The designer drugs discussed in the video are Rohypnol, a potent sleeping pill, or GHB, both used for date rape. Others include Ecstasy, ketamine (an animal tranquilizer), nitrous oxide (laughing gas) and YABA. The drugs are popular with the 14- to 22-year-old crowd.

"These drugs are very unpredictable," said Lee. The safety depends upon the "cooker," the person who makes the drugs. "The drugs can be made in a kitchen sink or in the back yard."

For the cookers, profit margins are huge. A pill costs about 20 cents to manufacture and can be sold for about $20.

And unlike in the past, when parents may have caught a whiff of marijuana smoke or discovered a stash of drug paraphernalia, a pill leaves "nothing to process and nothing to smell, so it is easy to hide," Lee said. As a result, teens are able to hide them in candy bags along with their M&Ms and Skittles, in cigarette tips, inside hidden niches carved into the soles of their shoes, and in clothing or belt buckles.

If you see the Vicks VapoRub disappearing from the medicine cabinet or if clothing smells of the product, an investigation may also be in order. Vicks is smeared on the inside of dust or surgical masks and worn to enhance the experience. Energy drinks also boost the high of Ecstasy, Lee added.

Other paraphernalia to look for are pacifiers and friendship beads. "Friendship beads are handed out at rave (all-night dance) parties," Lee said. 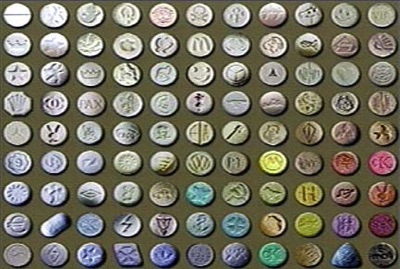 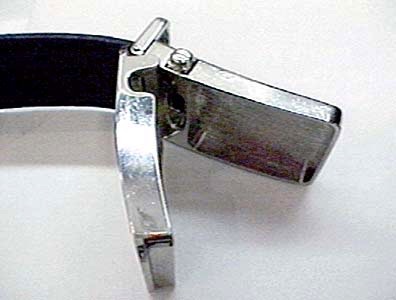 Kids sometimes hide drugs in belt buckles. The images are from a video intended to educate parents.

METHAMPHETAMINE IS the base for many of the drugs, so pacifiers and lollipops are used to mask the clenching of the jaw and grinding of teeth, Lee added. Parents can also look for mood changes, pupil dilation, or simply watch to see if their kids are sleeping as the drug causes insomnia.

Trying to identify the drugs is difficult. The street names change, and there are hundreds of names for them. Cookers create their own designs or unique stamps and use designer names familiar to kids, such as Volkswagen, Mitsubishi, McDonald's, Burger King or Calvin Klein.

Youths or young adults slip drugs to unsuspecting victims for a variety of reasons, Lee explained. "One is for date rape. Or it could be a big vendetta. Others may think getting high is great, and they want to share the experience with their friends." The old warning -- never leave a drink unattended -- still stands.

And beware the stranger with candy. Kids may spike handfuls of M&Ms or Skittles, and in the dark of a nightclub, a recipient is likely to pop the entire batch into his or her mouth without a second glance. Tootsie Rolls are easy to doctor because ecstasy can be molded into the soft center before being re-wrapped. And eye-drop bottles may also be emptied and replaced with GHB or a liquid amphetamine, Lee added. 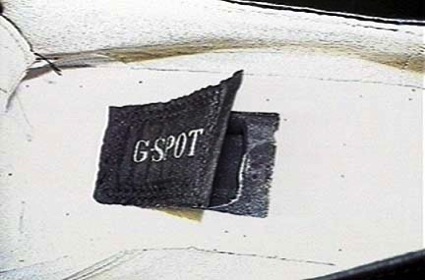 Kids can be sneaky about hiding their drugs, as in a cavity cut into the sole of this shoe.

Sgt. Ford Ebesugawa, who handles the juvenile services department of the Honolulu Police Department and has been active in the DARE program for several years, agrees.

"The key is prevention," Ebesugawa said. Ignorance is one of the reasons youths turn to drugs, he explained. If parents talk to young children, by the time they are teenagers, they have an idea about what is going on around them.

"If no one tells them that drugs are bad, they don't understand the dangers. It's also hard to educate kids about the dangers of drug use when mom and dad are using it. ... It sends mixed messages," Ebesugawa said. "Lots of parents don't know where their kids are or who they are hanging out with."

Parents need to start a relationship with their child and spend one hour a week simply talking to them about their life, Lee said.

If we want to combat drug use and abuse, we need to form a collaborative effort with parents, schools and law enforcement, Ebesugawa added.

ONE RESULT of the user-friendly appearance of the new drugs and their association with candy and play is that kids do underestimate their dangers. "It's just as dangerous as 'ice' when you look at what's happening to the brain," explained Lee.

A drug user may not get a bad or deadly batch, but the long-term effects can still be devastating. The Alu Like video shares the story of a 22-year-old girl named Lynn whose brain, damaged by drug use, was similar to that of a 65-year-old who had suffered from multiple strokes.

CAT scans showed several holes in her brain. When admitted to the hospital, she was unable to recognize family and friends. "It was like a bad movie that I was watching. I couldn't press stop or eject," Lynn said. "The more you do it, the more blurrier things become. I was becoming one big blur."

She is lucky. Others in the video are dead.