“So Kane again struck the earth...and water gushed forth...and many were the waterholes made by Kane between Hanauma and Leahi (Diamond Head).1” Fresh water was considered by Hawaiians a spiritual life-giver...and they made numerous prayers regarding the “Waters of male procreative energy in fresh water, flowing on or under the earth in springs, in streams or rivers...”2

Kanewai Fishpond is the last functioning shoreline fishpond in Honolulu, with the exception of Mokauea Island. The fishpond was assessed to have the historic properties meriting a listing on the State Historic Register and satisfied the National Historic Register criteria. It was also listed to be one of O'ahu's few remaining royal ponds and one of two remaining loko pu'uone hakuone (Type II) on O'ahu.3 Today it is commonly referred to by the name Kuliwai.

The pond's history spans almost a thousand years, evidenced by numerous associated water gourd and fishing artifacts currently housed in the Bishop Museum.4 In 1786, Kanewai Spring was the probable site of the first European visit to O'ahu and the second to Hawai'i. Captain Portlock's ailing crew was supplied with fresh water calabashes from the native canoes. Upon their return in late 1786, they were often visited by the ali'i nui Kahekili, the chief of all the Hawaiian islands except Hawai'i.5 After Kahekili's entourage left in their double-hulled canoe, the ships were supplied with "fine mullet" probably from one of the nearby fishponds.6

Kanewai fishpond is connected to Paikō Lagoon Wildlife Sanctuary by a rock 'auwai and makaha, which was designed as a movable double gate system. This allowed fish to be caught between the gates. Small fish swam freely in and out of the pond, while large fish were trapped in the pond. The makaha was placed at precise locations where currents occurred. By studying nature, Hawaiians knew that fish would gather in these areas. Using the ebb and flow of the fishpond's water, Hawaiians were able to lure fish near the makaha as well as keep the ponds well circulated. Today the pond hosts a variety of species including kaku (barracuda), Samoan crab and "Upside down" jellyfish (Genus Cassiopeia).

Until the mid 1990's the pond's spring supplied the area with 200,000 gallons a day and its restoration holds great potential for the future health of the surrounding Maunalua Bay. The State Department of Transportation currently shares ownership of Kanewai fishpond with several adjoining owners. While at this time the community does not have access to this fishpond, it is the hope of many in the community that Kanewai remains protected in the public trust and one day the community will be granted access to care for and learn about this priceless fishpond. 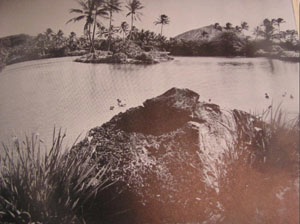